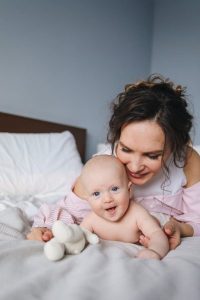 Torticollis - Does your child tilt their head to one side?

Does your baby have a flat spot on one side of their head but seems to rest with their ear towards their other shoulder?

Then your baby may have Congenital Muscular Torticollis...

Congenital Muscular Torticollis (muscle tightness in one of the muscles in your baby's neck) of the neck is usually diagnosed at birth or shortly after birth.

It is likely related to the way that your little one was positioned in your tummy during pregnancy - resulting in tightness in one of the muscles in their neck.

The culprit muscle we are referring to is called your sternocleidomastoid. Now don't get too strung up on what the name of this muscle is, but it sits on the front of your neck. If you run your hand up from the centre of your collar bone out towards your ear you should be able to feel a thick band of muscle - this is the one we are referring to.

Now this muscle is confusing in the way that it pulls, however when it contracts it bends your neck to the same side (ie brings your left ear to the left shoulder if the left side is involved) but actually turns the head the other direction (ie to the right in this example). This can mean that it is sometimes persistent and tricky to treat and may actually reappear after treatment when your bub is undergoing a growth spurt or unwell.

If there is a lump in this muscle, your doctor may wish to ultrasound your baby's neck to confirm that the lump is found within this muscle.

Treatment involves repositioning, stretching, environmental changes and play to help strengthen the muscle on the opposite side.
All the evidence suggests that the earlier torticollis is treated, the better the outcome, so be sure to link in with your GP, paediatrician or paediatric physiotherapist to get on top of it early.

Does your child have a flat head?

Plagiocephaly - What does it mean?

The meaning of plagiocephaly is all in the name, 'plagio' meaning oblique or slanting and 'cephaly' referring to the head or skull.

So in English it means - that your child has developed a flattening of the back of their head.

Now this can occur in-utero (so whilst in your stomach during pregnancy) or after birth and is a consequence of repeated pressure on one side of the head causing a flattening of the still 'soft' skull. This is usually a consequence of your infant developing a preference to rotate their head one way and with this repeated turning over time (whilst on a hard surface ie lying on their back) they develop a flattening.

Why is it seen more commonly?

Now since the introduction of the 'Back To Sleep' campaign in 1992 (now known as the 'Safe to Sleep' campaign) it has meant that there is a huge emphasis on children being placed on their back to sleep. As children spend most of their time sleeping, it is really important that during their 'wake' cycles that they are not kept on their back and instead are placed on their side or their tummy to play. This will allow them to strengthen the muscles of their neck whilst also offloading the back of their head.

Will there be a change premanently to my infant's head?

Now the role of your GP, paediatrician or paediatric physiotherapist will be to clear that there is no premature fusing  of your child's sutures to result in the appearance of head flattening. If this has been cleared, then the flattening of your child's head is purely aesthetic and does not affect their underlying brain development. In saying this, plagiocephly is associated with an increased delay in gross motor milestones and if the flattening worsens can result in facial
asymmetry (see the bossing changes that can occur over time) so it is important to get on top of it early whilst the skull has the best opportunity to remould.